If you work in the adult entertainment industry, getting exposure on social media can be hard. Most of the popular social media platforms are heavily moderated, restricting the publishing of nude or “sexually suggestive” images (whatever that means), they also tend to come with ambiguous or incomplete terms and conditions or community guidelines that are difficult for most people to follow, let alone a porn star trying to make a living. Those who have had their accounts arbitrarily deleted due to an anonymously flagged photo, know all too well the pain associated with having little recourse and being left with the only option of grieving the loss and rebuilding from scratch. Don’t let that guy at AVN who’s mad cause he didn’t get a selfie ruin all your hard work! Pornhub’s got you covered.

The app is ridiculously easy to use. Absolutely no sign-in is required. Simply launch the app and snap a photo. You can see from some of the images provided in this blog, I went with a banana to represent my manhood. Once a photo is taken, the app prompts you to choose which part of your body you’re covering up, using fruit to distinguish between the three important body parts. Once a fruit is selected, a selection of stickers is presented for you to choose from, including a gift, the ever-popular Eggplant, and a snake charmer. 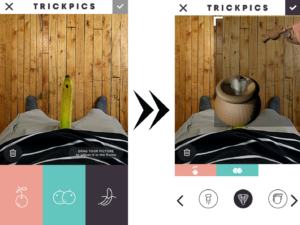 The finished product is something that is guaranteed to give your friends and social media followers a good laugh, or at the very least, put a mischievous smile on their faces.

The only major criticism I have about the app is in regards to rendering and download speed. Similar to other image editing apps like Prisma, for example, the rendering of the new image takes place on the app’s server side, not within the app itself. This dramatically slows down the image rendering process, and I found that waiting for my completed TrickPic felt annoyingly long. Even though the rendering time was probably closer to 2 minutes, but when you’re waiting for something to download, it may as well have been a millennium. Even more annoying is the fact that, once your animated creation is complete and ready to save, another minute or so is required for the image to be saved on your phone and ready to share.

Check out PornHub’s promo video on YouTube. They definitely aren’t being subtle about what the app does.